Four Men and a Prayer 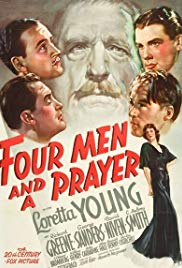 Four Men and a Prayer

Colonel Loring Leigh, British Indian Army, appears to have issued an order that cost 90 lives. Cashiered, he returns home, tells his sons of a conspiracy by an arms syndicate to supply the rebels...then is found dead, an apparent suicide. To clear their father, the four sons must globetrot in a hazardous search for evidence, closely followed by Geoffrey's sweetheart Lynn Cherrington.